RADIO LAZARETTO was started in the midst of the 2020 COVID-19 Quarantine by Ego Plum as a means of sharing music that's inspired him throughout his career. Describing as mostly an, "exercise in uneasy listening," the podcast will feature all sorts of unusual & esoteric music from Plum's collection, but will also feature cues and songs from Plum's soundtracks and scores, unreleased tracks, rejected tracks, music-related stories & anecdotes, interviews, and candid conversations. Shows will be produced periodically on no schedule whatsoever. 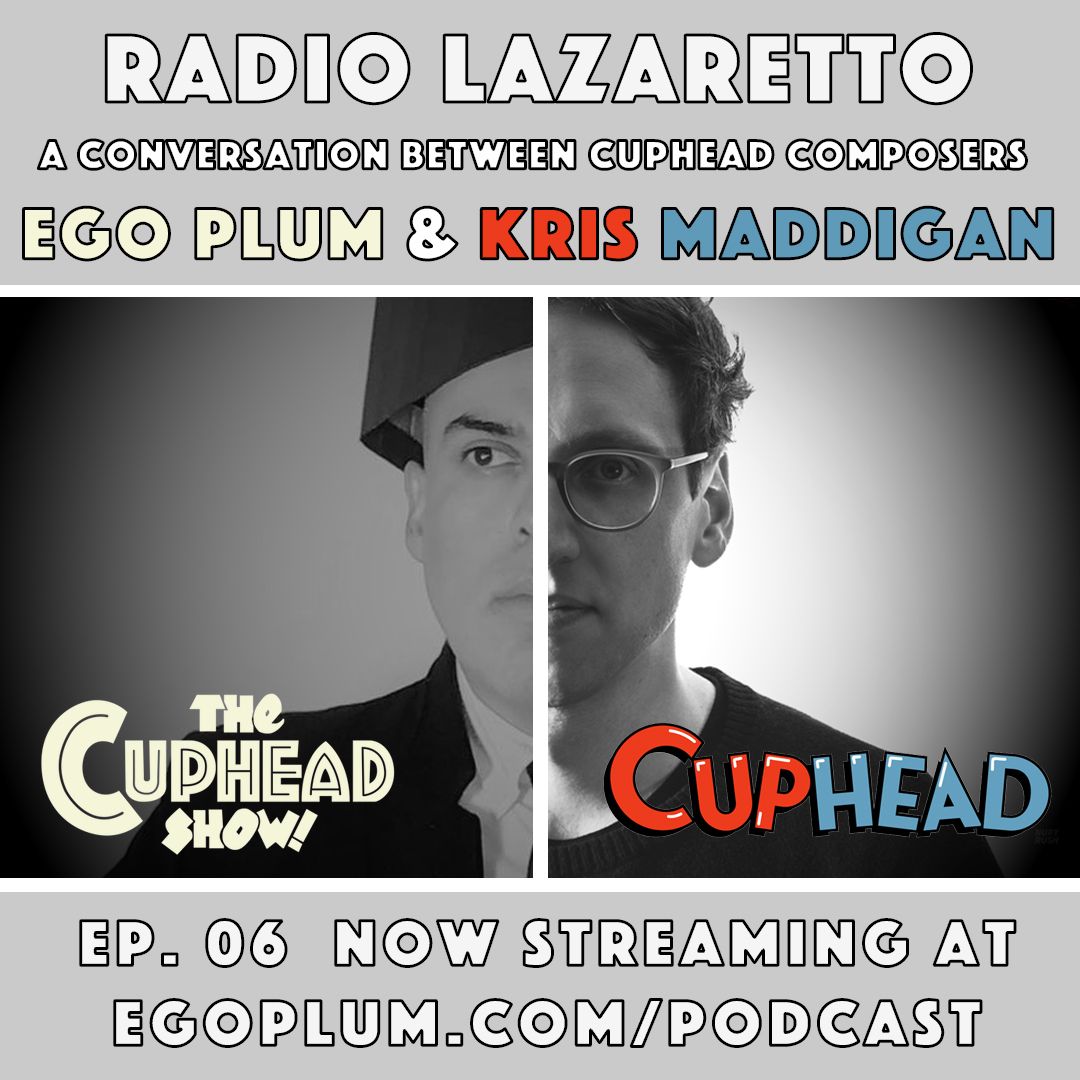 Cuphead Composers Ego Plum and Kris Maddigan speak for the first time on the phone live on Radio Lazaretto. Hear them describe their respective composing processes! Hear selections from both the Cuphead DLC and the Cuphead show! Hear these two gentlemen discuss Neil Peart, the Smashing Pumpkins, playing the triangle, and much more. This podcast also includes selections from both Ego and Kris of music that has inspired them in the creation of their respective Cuphead worlds, including music by Leroy Shield, Raymond Scott, Leigh Harline, Frank Churchill, and more.

EPISODE 05 of RADIO LAZARETTO is a "DPRK-POP SPECIAL" which features patriotic songs by North Korean pop groups (created under the guidance of Kim Jong Ill) going head to head with "experimental" K-POP from South Korea. Featuring music from Lee Jin Ah, Pochombo Electronic Ensemble, Ga In, Wangjaesan Light Music Band, NCT, and others. In addition, this episode features CHINESE PUNK ROCK coming out of Beijing, ACCORDION JAZZ FROM ETHIOPIA, MIND-NUMBING INDUSTRIAL PANIC-CORE from Nintendo's KIRBY SUPER STAR ULTRA game, as well as tracks from the inimitable SNAKEFINGER, and many others. CURATED & HOSTED BY EGO PLUM.

Ego Plum pays tribute to the great Ennio Morricone and features music inspired by the maestro's work from WALL OF VOODOO, ADAM AND THE ANTS, DEVO, THE FIBONACCIS, PIXIES, SNAKEFINGER and more. In addition, an homage to the eccentric genius, TIM SMITH of the the band CARDIACS (who passed away July 22, 2020). in addition, mind-blowing folk punk from Hungary and the former Yugoslavia, and (according to Plum) the greatest piece of film music in the last 10 years. All this and more on Episode 4 of Radio Lazaretto!

The Great Disease was mighty and the people were sick everywhere.

It was an epidemic, it floated through the air.

Soldiers died on the battlefield, died in the towns too.

INFLUENZA BLUES! Pestilential Music inspired by the Pandemic of 1918? The first song ever sung by a computer in 1961? Perfect Pop songs from a tiny dog named K.K. SLIDER? ARMENIAN SURF ROCK from BELGIUM? Cartoony Hardcore music from the DEAD KENNEDY'S? Hardcore Cartoony music from CARL STALLING? YES! All this & more on the latest episode of RADIO LAZARETTO.

1970s DEVOTIONAL MUSIC from Australian Nuns with drum machines? KOJI KONDO's brilliant 8-bit ragtime from 1995's YOSHI's ISLAND? 1970s Electro from WEST AFRICA? Easy Listening Casio Reggae from JAPAN? Solo music from the DEAD KENNEDY's very own KLAUS FLOURIDE? Plus everything from COLE PORTER to THROBBING GRISTLE. All this and more on the second episode of RADIO LAZARETTO.

Electronic music made from paper... From 1932... AND from the Soviet Union? Dutch experimental music from the 1950's? Theme songs from forgotten cartoons? Raymond Scott's most jarring electronic works? Synth themes from Disney's 1982 cinematic failure TRON? A tribute to the great 90's Nickelodeon and Aeon Flux composer Drew Neumann? A touching remembrance of Florian Schneider of Kraftwerk? YES! All this and more on the first episode of RADIO LAZARETTO!