October 29, 2012 - Anyone that's followed my work probably knows that one of my biggest musical influences is Raymond Scott. Aside from making the music that was so beautifully adapted by Carl Stalling to hundreds of the Warner Bros. Looney Tunes, Raymond Scott was also a recluse inventor of electronic instruments and essentially pioneered electronica and electronic dance music with his musical experiments in the late 50's and 60's. That second part of his career had mostly remained a secret until the release of the critically-acclaimed  Manhattan Research, INC.  double-CD in 2000 (produced by Jeff Winner and Gert-Jan Blom).

Last year I contacted my friend Steve Bartek (composer/orchestrator/Oingo Boingo guitarist) with the idea of putting together an ambitious tribute to Raymond Scott in which we would offer our own takes on his music - everything from his insane cartoon jazz to his inexplicable electronic compositions. Going a step further, I also contacted my friend Sean Cawelti (of the award-winning puppet/theater group Rogue Artists Ensemble) to help re-create the infamous Raymond Scott/Jim Henson collaborations for the first time ever on stage.  With the invaluable assistance and blessings of music historian/producer/archivist Jeff Winner, we were able to make this dream a reality. I am very happy to announce: 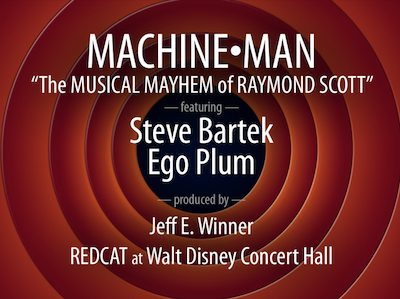 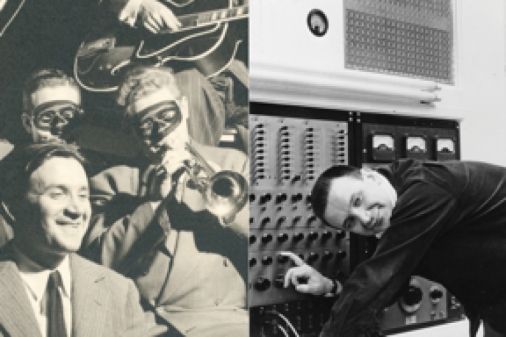 Steve Bartek has also put together an amazing band that includes some of his old friends from Oingo Boingo. He will definitely not disappoint. Please get your tickets soon because the rumor is this event is on it's way to selling out!

Though musical shape-shifter Raymond Scott may no longer be a household name, his inimitable “cartoon jazz” is instantly recognized by millions: it has been adapted to underscore the antics of BUGS BUNNY, DAFFY DUCK, REN & STIMPY, THE SIMPSONS, and many other cartoon characters for 75 years. Scott, moreover, was an inventor of instruments and a pioneer of electronic music.